Netflix finished down over 30% after its earnings on Wednesday.

That’s right: More people are leaving Netflix than are signing up right now.

Some of that’s easy to explain away.

There are only so many people in the US that haven’t subscribed, and at this point, they might be the people intentionally avoiding Netflix. The company’s been close to market saturation for a while.

And sure, you could make the case that there are other fundamental reasons for the drop in subscribers.

They have a ton of competitors now and their original content seems to be missing the mark… and, of course, Netflix blamed Russia for losing about 700,000 subscribers.

Yet there’s another reason I think is taking hold, and we can see this reflected in the stock price of other companies like Netflix…

We’re tired of their crap.

As a parent, I’m sick of having to screen all the crap Netflix puts out.

But when I see the “values” Netflix is trying to impose on my family, I just want to opt out of it.

Guess who agrees with me? Our favorite billionaire:

Just like with Twitter… it’s gotten so bad that Elon Musk had to weigh in. Maybe he’ll go after Netflix next…

But my point is this:

When you try to inject every single piece of content with a set of values — especially when it’s so on the nose — it becomes unwatchable.

And it’s not just political. It’s the animation style and the kind of culture they put out. 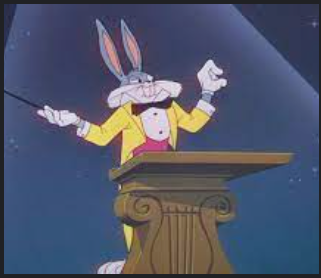 Was it violent slapstick? Absolutely.

But they also had classical music. Looney Tunes is where I first heard the Minute Waltz and the Barber of Seville:

Watch that video above and you’ll see something interesting…

The crap that they put out now is low-budget animation with bad value systems and no cultural relevance — and the cuts are less than 10 seconds long.

Watch enough of it, and your world becomes an oversaturated, ADHD-generating cesspool.

I know my family is opting out. We’re done.

See, when I grew up, we had just started the transition from analog to digital. We had internet access, but only through screechy dial-up modems that would tie up your phone lines.

Was the “information superhighway” a dangerous place?

Hell yes it was. But there were distinct benefits to how it operated — namely, the duration, accessibility, and bandwidth.

If your sister wanted to call her friend, she would just dial a number and break your internet connection.

Oh, and you couldn’t take this connection with you because we didn’t have any mobile devices. We had “dumb” phones at best.

Want to watch a 3-minute video?

Great! Prepared to wait 3+ minutes for it to download.

These limitations put guardrails on what we could watch, and for how long.

Contrast that to our “always connected” society, with instant access to any movies you want…

Oh, and the software will always autoplay something else to keep you stuck in the cycle.

Instead of reading a newspaper — which has an edge and a stopping point — we get our dopamine fix through constantly “doom-scrolling” the latest news.

We get addicted to outrage and anger, leaving us feeling like garbage every day.

Based on the stats I’ve seen, we’re less healthy, more depressed, and absolutely miserable when we’re in a fully virtual world.

All these wonderful technological improvements… how’s that going for us?

This is why I’m going to try something radical.

My family and I are going to take our lifestyle back to 1996 levels.

Yeah, we have Internet access, but we won’t waste hours being miserable on social media.

We can watch movies and TV, but through actual physical media.

(Yeah, I know Blockbuster isn’t open anymore, but you’d be shocked at how well-stocked your library’s DVD collection is.)

The entire intent here is to take our family back to what we consider a better time. This isn’t just blind nostalgia — we can see very specific societal turning points when broadband, and then Web2 kicked in.

It’s highly possible many are taking up that last one. Maybe you have as well, or are making an attempt to do so.

I’ve spoken with people around my age — the generation that bridged the analog-digital gap. We know how fun the Internet used to be, and we’ve also witnessed what Web2 and “always-on” connectivity have done to the most recent generation of kids.

And that brings me full-circle back to NFLX.

And it’s why Roblox (RBLX) is making new lows.

Nobody wants this crap anymore.

Now, that’s just on the cultural and family side. What about the financial side?

I have absolutely no problem going long ON these stocks for a trade.

There’s a difference between a stock and a company, and a dollar won playing NFLX is the same as any other win.

I want to show you two charts of where I will consider a fade on these moves.

The first is in DIS:

This stock is in “no-man’s land” with a distinct lack of volume traded at this level relative to what we’ve seen previously.

When this happens, the stock has a tendency to move to the next volume shelf. Here, that sits around 116 – 117.

This would be the first place to start considering a fade. If those levels don’t hold, you could see $110 per share, which is the high volume node (HVN) over the past few years.

I expect the selling to slow into that. I don’t think the stock will go straight to all-time highs anytime soon, but profits earned from a bear market bounce still pay just as well.

If you have the margin, you could also consider selling puts as we head into those levels. Then, if assigned, you throw on some covered calls.

I’m long some shares that I started buying after the earnings reaction came out. That means I’m at a loss… but when I say “I bought the stock,” I’m dealing in 5 share orders.

That’s right. Not 500, but 5-10 shares per order. It’s still incredibly small position sizing just to get a feel, and if we come into my next zone, I’ll be adding again.

One more thing before you start smashing the buy button — nobody’s forcing you to catch a falling knife in this market. You shouldn’t expect the stock to jump just because “It’s down a lot.”

There was a key support level from 2018 that came into play between 231 and 250. I think a lot of folks were playing off that level, so I’m not shocked it ran through that.

The next area that I’m watching is 202, the volume shelf from the 2017 trading range. That’s my first buy spot. The next is the other end of the range at 176.

Underneath that, things get weird. I have two swing Anchored Volume Weighted Average Prices (AVWAPs) going back to 2011 that could come into play, but that’s another 100 points from here.

Oh, and one more consideration. This is a little advanced and goes outside of what we normally discuss:

When a stock’s post-earnings move is much larger than what the options priced in, a ton of market participants end up offsides.

I can think of a few “options gurus” who sold puts in this name around the 280 strike… and are now deep underwater.

That’s one of the reasons the selling was exacerbated. The options market was driving the underlying price of the stock.

If that options-related deleveraging goes away, you run out of a ton of supply power, and the stock could see a bounce.

That’s it for my analysis on these names.

And speaking of these companies, if you’ve noticed the negative effects of buying into the “always-on” culture…

The worst that happens is you save a little money on Netflix and your other streaming services for a couple months.

And in the meantime, use your extra time to learn the very Trading Roadmap I used to show you all the levels on DIS and NFLX.