Get Out of Crypto Now!

On Tuesday, Bitcoin (BTC-USD) prices found themselves under the $30,000 mark, a one-fifth decline from the week before.

If this were a deep-value stock, I would recommend buying the dip. Profit-generating firms have strong “intrinsic values” that provide downside protection.

But Bitcoin and its ilk have no such buffer. Much like fiat currencies (which can also go to zero), cryptocurrencies only have worth because other people believe it has value. Once that trust disappears, cryptocurrencies head for zero.

As crypto prices continue to fall, my Momentum Master strategy continues to flag “sell” on the asset class. 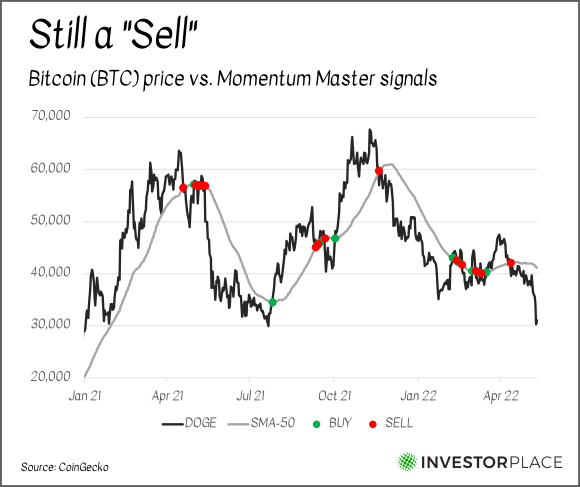 The strategy, unfortunately, forces us to lock in losses. But if history is any indicator, Bitcoin and other cryptos have a lot further to fall before we hit the bottom.

Bitcoin isn’t the only cryptocurrency getting crushed this week.

On Monday evening, Terra Luna (LUNA-USD) dropped 60% as its stablecoin TerraUSD (UST-USD) lost its dollar peg. By Wednesday, confidence in the entire ecosystem had collapsed. LUNA now trades under $1.

It’s a devastating loss. Terra was one of my top crypto choices last December; at the time, I called the token “game-changing.” And though I cautioned investors about its $66 “hot-money Solana” price, even I didn’t foresee such a rapid decline.

“Terra is rewriting the rules for how stablecoins operate,” I wrote in that letter. With its collapse this week, Terra Luna’s legacy looks far more infamous than I anticipated.

A Terra-ble Thing to Waste

The Terra ecosystem relies on a system of arbitrage to create its stablecoins. Rather than use hard assets like gold or dollars to back its currency, TerraUSD depends on traders to exchange between UST and LUNA to maintain a dollar peg.

The “algorithmic stablecoin” has clear benefits over rivals like Tether (USDT-USD). Rather than back each coin with hard assets — a system that has been provenly gamed — Terra uses a set of free-market incentives to hold the UST/dollar link.

If UST drops below $1, the Terra system automatically rewards traders who swap units of the stablecoin for Luna. That decreases UST supply and increases its price. And if it rises above $1, the opposite happens.

In a sense, the system mirror ETFs, an asset class that relies on arbitrageurs and market makers to maintain prices.

But there’s a catch: if people lose confidence in an arbitrage system, everything grinds to a halt.

And that’s exactly what happened Monday evening at LUNA HQ, as UST slipped to $0.80…

The most likely explanation is that an initial LUNA drop reduced demand for converting UST into LUNA. With fewer arbitrageurs willing to reduce the UST supply, the network’s burn mechanism couldn’t keep up with investor-based sales.

Whatever the initial cause, the eventual outcome was clear: in a self-fulfilling prophecy, investor distrust in Terra’s ecosystem caused its peg to become untrustworthy.

Even now, no amount of cajoling by Terra CEO Do Kwon can seem to stem the tide.

Terra’s flagship cryptocurrency would lose 97% of its value anyway.

Bad news would keep piling up. On Wednesday, allegations surfaced that Mr. Kwon was previously involved in a failed algorithmic stablecoin, Basis Cash. And by Thursday, Terra had lost virtually all its remaining value.

Don’t Wait for a Recovery

In the current market environment, few investors are willing to “buy the dip.”

On the retail investor side, social media has stuck to habitual favorites. This week, trending tickers on Stocktwits, a popular investment forum, included such investments as the S&P 500 ETF (NYSEARCA:SPY) and AMC Entertainment (NYSE:AMC). Cryptocurrencies rank far lower.

Meanwhile, institutional investors seem hesitant to double down on their crypto losses.

“Bitcoin is a great barometer for risk now,” said Neil Wilson, an analyst at brokerage Markets.com. “And we see its decline as evidence of significant deleveraging.”

The Momentum Master strategy echoes the sentiment. Sudden price drops are generally clear warning signs to cash out of the market.

After all, a “momentum bet” without the “momentum” is… Well…

Just a bet. And the odds on crypto keep getting longer.

In other words, tactical investors should consider reducing their crypto stakes in the near term, even if it means locking in some losses. The only thing worse than losing a $20 in your wallet is losing a $100.

Buying the token today is a naked bet on whether the Terra team can reestablish trust in its system.

On the one hand, other financial firms have done it before (i.e., American Express in 1973 and Citi in 2008). If LUNA can regain investor confidence, it’s a 10x potential return.

On the other hand, many others never come back from the brink. Barings Bank disappeared in 1995 after a rogue trader lost millions. And Lehman Brothers remains the punchline for many Wall Street jokes.

Today’s closed-door negotiations may end up saving Terra. But much like the 2008 talks that saved Citi and sacrificed Lehman, outsiders are flying blind. Mr. Kwon has hidden the truth from investors before. He may do so again.

Should I Buy Ethereum?

Long-term crypto investors might still feel confident about high-quality plays like Ethereum (ETH-USD). When you’re the dominant cryptocurrency in NFTs and token finance, it’ll take more than a market downturn to obliterate your long term prospects.

Still, buying Ethereum today is a bit like investing in Amazon (NASDAQ:AMZN) in the mid-2000’s. Prices are down from their peak, but there’s still clearly more room to fall.

During the dot-com crash, many startups suffered from their reliance on customers and funding. Venture capitalists losing money on one company tightened their purse strings more broadly. That triggered unintended bankruptcies at more promising startups, and so on. Amazon primarily survived the dot-com bust thanks to a well-timed issuance of $672 million convertible bonds that year.

Cryptocurrencies will face a similar crunch over the next several months. Less funding from VCs and investors will starve promising crypto teams of development capital. And since many coins share common ties, losses in one crypto will surely snowball into upsets elsewhere. For instance, less trading in NFT will impact exchanges, Ethereum and Layer-2 protocols such as Immutable X (IMX-USD) that power the trades.

Rising rates will also worsen the situation. As the Federal Reserve hits the brakes on an overheating economy, investors will find themselves with less spare cash to speculate.

As I wrote on Tuesday, many investors are still ignoring these risks. Meme coins like ApeCoin (APE-USD) are still hot, despite losing billions of investor cash. And zero-revenue firms like Nikola (NASDAQ:NKLA) still manage to hold onto billion-dollar valuations.

That means even higher-quality assets like Ethereum still have room to fall (I predict a 6 to 12-month recovery is in order).

But don’t wait forever; no one is belaying down the mountain to tell us to invest once we hit the bottom of the market.