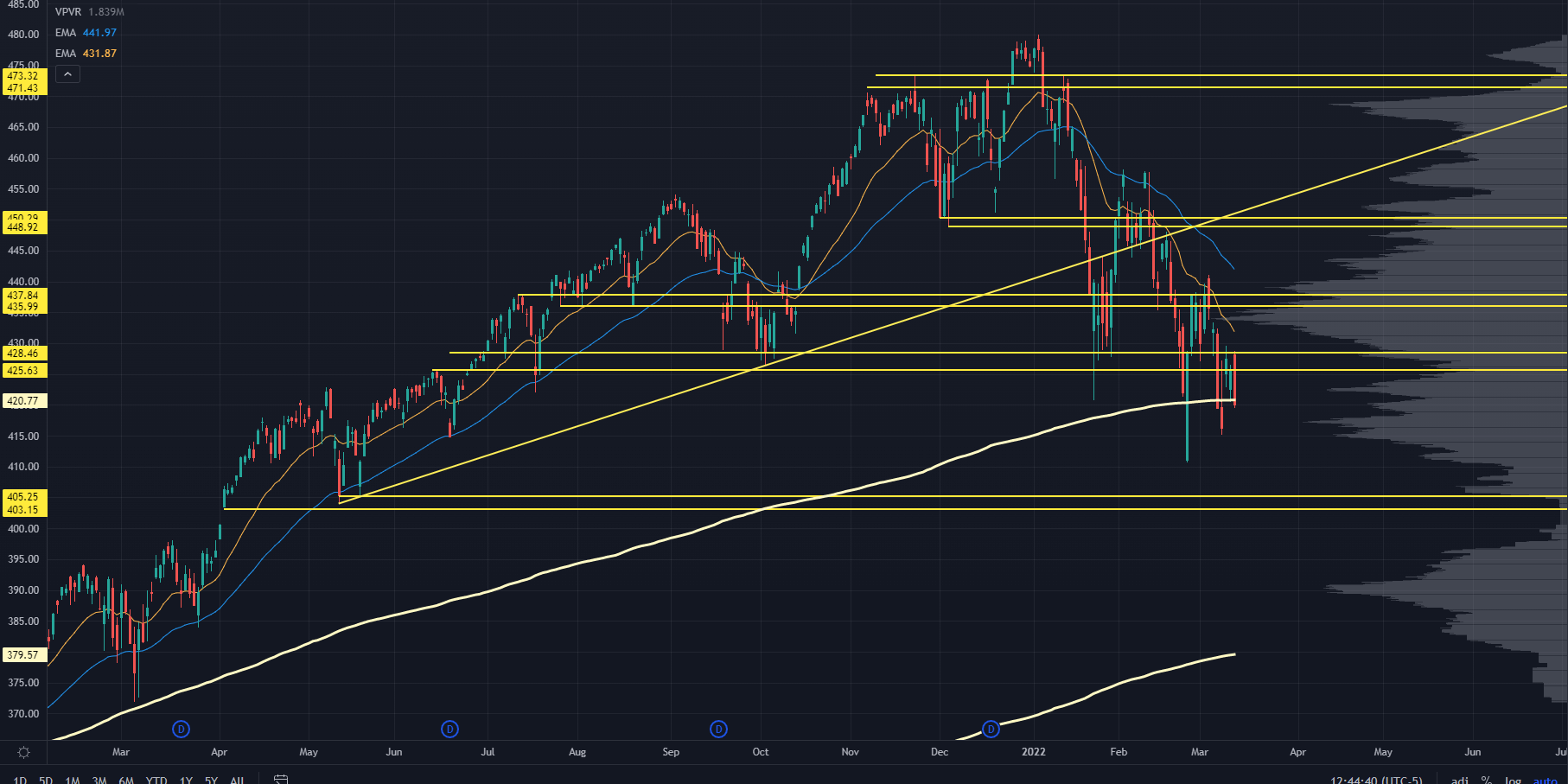 The “trickle-down” effect is a very real thing in the markets — especially when it comes to volatility.

Take a “risk-parity” fund, for example.

These firms hold a collection of equities and bonds and will rebalance every so often to keep the allocations about the same.

And yet, there are some instances (like right now )where bonds and stocks sell off in lockstep, putting these funds in a tight spot and potentially forcing them to liquidate to raise cash.

This is a very narrow case study in a market exposed to many different “convexity” events happening simultaneously.

Here are some other examples:

Interest Rate Volatility: When the Fed is behind the 8-ball on inflation and is forced to raise interest rates, firms have a tougher time forecasting stock returns, causing them to sell stocks. We saw that for months now in tech companies that aren’t currently profitable.

Commodity Upside Crashes: If a hedge fund gets too cute with trying to fade oil or other commodities, they end up with a margin call. If they had long equity exposure, they’re forced to liquidate.

Hedging Gone Wrong: We’ll talk about this when we go over the VIX, but if you’re an investor that bought puts after premiums went through the roof, you haven’t had any kind of protection in this market. They may end up puking the hedges and their positions, possibly leading to further liquidations.

Over the past few months, these kinds of risks have been trickling out, leading to higher volatility in the market and a lack of any “sticky bid.”

And you end up with this low-liquidity, sloppy trading where we can’t see any followthrough as more people still feel stuck in their trades vs. those in a position of confidence.

I’m viewing this week as a “here or there” kind of setup. Either most of the bad news was priced into stocks and hedging into the Fed meeting…

This is still a choppy, high-volatility mess. Make sure you’re trading the right instruments, using smaller position sizing, and putting the volatility in your favor versus just blowing out of your positions on another 2% gap down that sees a massive reversal. 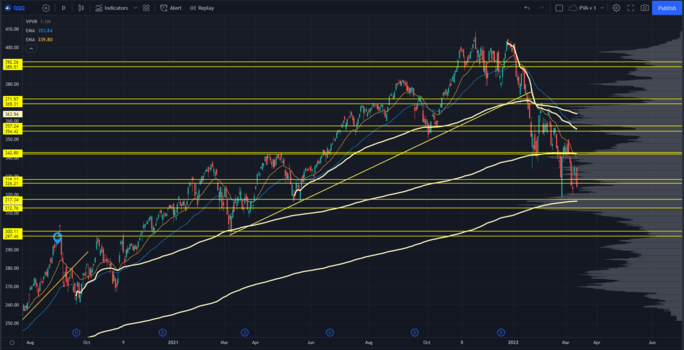 We’re kicking it off with the Nasdaq 100 today because this presents the largest risk in US equities.

The majority of the Nasdaq’s price movements come down to a handful of stocks: MSFT, AAPL, AMZN, GOOGL, NVDA, TSLA… and poor FB, which is now down to #8.

A brief view of these stocks will show you that they haven’t seen technical improvements. Many went out on the lows of the week, with much better levels underneath the current price.

Ignore the macro, the wars, and the Fed.

Thanks to the sheer weight of these names, you’ll see everyone panic just from a normal pullback.

The whales are big enough to potentially trigger a liquidity event in the markets.

Again, the flipside here is that the bids did start to firm up this week (hard to explain why).

Here’s an example in AAPL:

There have been responsive buyers around 156 throughout the week.

That level was taken out on Friday, but it wasn’t a massive cascade lower. We actually saw a mid-day bounce before the end-of-week trade took it out.

Are these “hidden” buyers slowly scooping up shares into peak uncertainty?

It’s possible — we’ve seen many instances where AAPL was a liquidity source for funds. Funds could park cash in that stock during times of uncertainty.

Again, it’s a “here or there” kind of mechanic. Either these mega-cap tech stocks take out their swing lows and grab some better levels, or we see a fast move to week’s highs.

We have a clear area around 313-317 on our Trading Roadmap. This is the swing Anchored Volumer Weighted Average Price (AVWAP) from the March lows that hasn’t been properly tested.

Below that, we have a marginal level at 307. This is prior price support and a key Low Volume Node (LVN) on the Roadmap.

And below that is the big one at $300. This represents the Summer 2020 highs and last year’s low.

Since so many eyeballs are on this one, I wouldn’t be surprised if we saw a bearish breakdown that grabs 307 but doesn’t go to the level everyone feels entitled to.

The levels above are fairly straightforward. Internal pivot at 342, then the December swing AVWAP comes into play around 349.

If we were to get some kind of monster bear market rally, expect the price to slow down as it heads into 360. 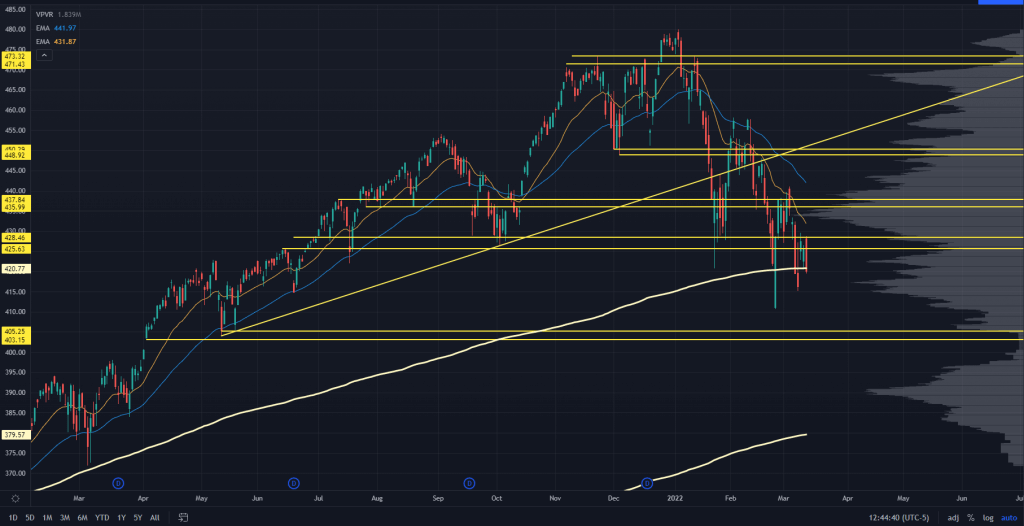 Due to index composition changes, this looks a little better than the Nasdaq. We have seen some higher highs, and the overall structure is still intact.

The 425-428 area on our chart is where the responsive sellers continued to show up, especially on that Friday gap up.

That’s the line in the sand that must hold for any bullish attempt to be taken out.

If we were to see a flush, the cleanest area would be 403-405 — a huge support level and the volume shelf that developed from last year.

If we rally, expect resistance at 435 because that coincides with the AVWAP from the all-time highs.

The Russell still has some nice relative strength because of its better energy and commodities exposure.

It’s still in a choppy, high-volatility range, so it’s difficult to find any levels close to where we finished on the week. It’s continuing to develop a new value area, with the HVN at 197-199. Barring a true liquidity break, I expect that to act as a magnet level until the market can hold 204.

I’d still love a test at 211 since that lines up with some monster levels from different parts of our Roadmap.

As for levels lower, there simply aren’t enough to give us good data. November of 2020 saw such as strong run that we haven’t had enough back and fill to see where long-term buyers will truly step in.

This is a very interesting spot for the VIX, further reinforcing my “here or there” thesis into next week.

After the market has a hard selloff, hedging products get very expensive.

This means you really haven’t seen a lot of downside protection if you bought hedges over the past month.

This could force fund managers to reduce equity exposure and close out their hedges… simply because they aren’t working.

And it’s very possible this has been happening in these selloffs. In fact, it’s one of the reasons the VIX hasn’t made higher highs during these selloffs.

I’m watching the 30 level. A proper close underneath that level — especially if we squeeze two days together — can easily lead to a massive bear market rally as the “tail wags the dog” and option flows push stocks higher.

I’m not expecting the VIX to explode higher here… unless we get some truly exogenous event from either the Fed, Eastern Europe, or a contagion event that comes out of left field (think credit markets).

Trade safe this week. It’s a huge week for the markets. Make sure you aren’t trading on tilt!

I’ve got a better idea: Take advantage of our Market Roadmap (the same one I used in this Market Primer) for yourself.

Just head here to watch a free presentation on our Roadmap.

Oh, and we have some amazing setups lined up inside of Precision Volume Alerts using the Roadmap. I’ll explain how to become a member in the middle of that Roadmap presentation…

So go here now to watch it!