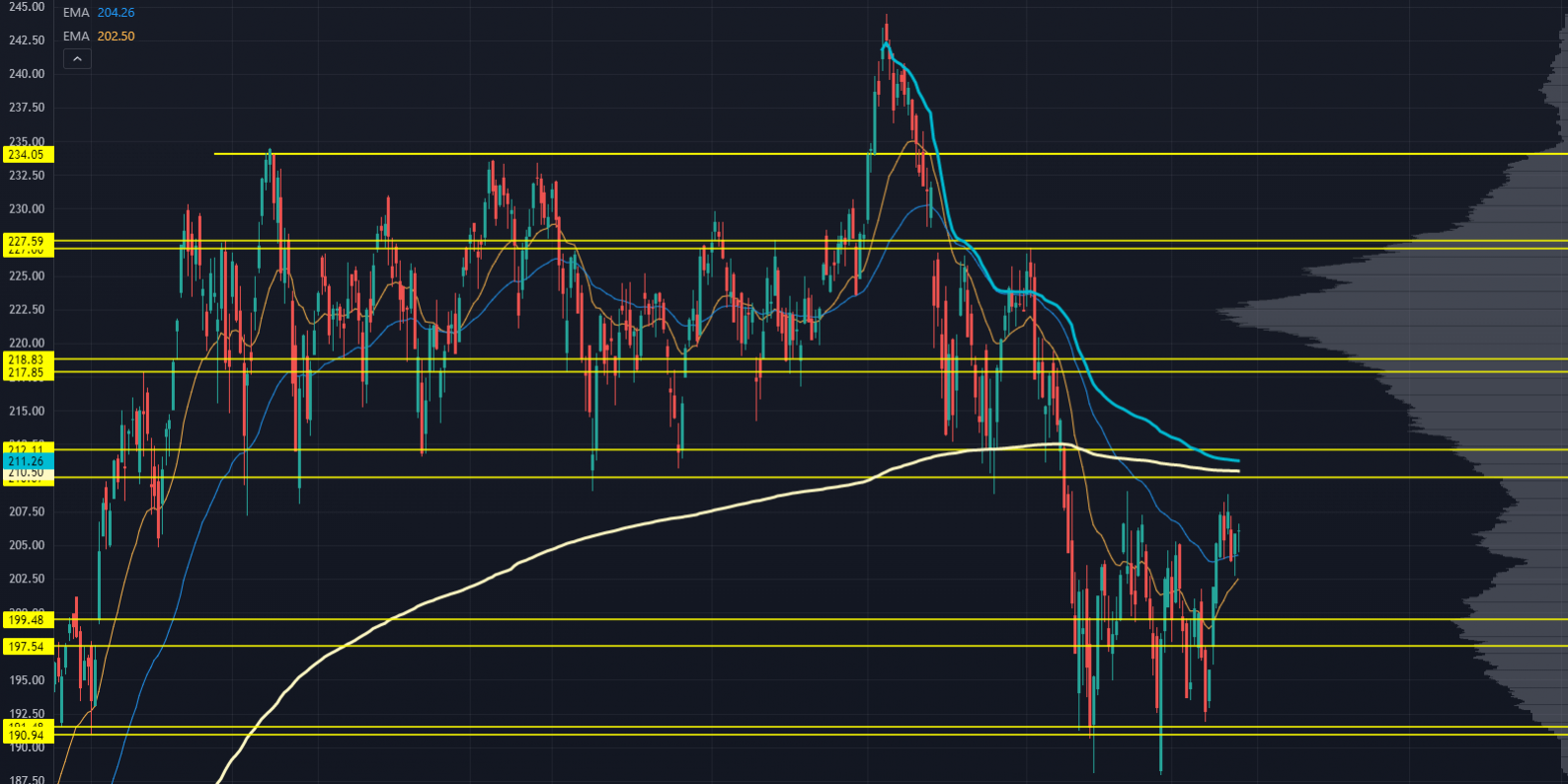 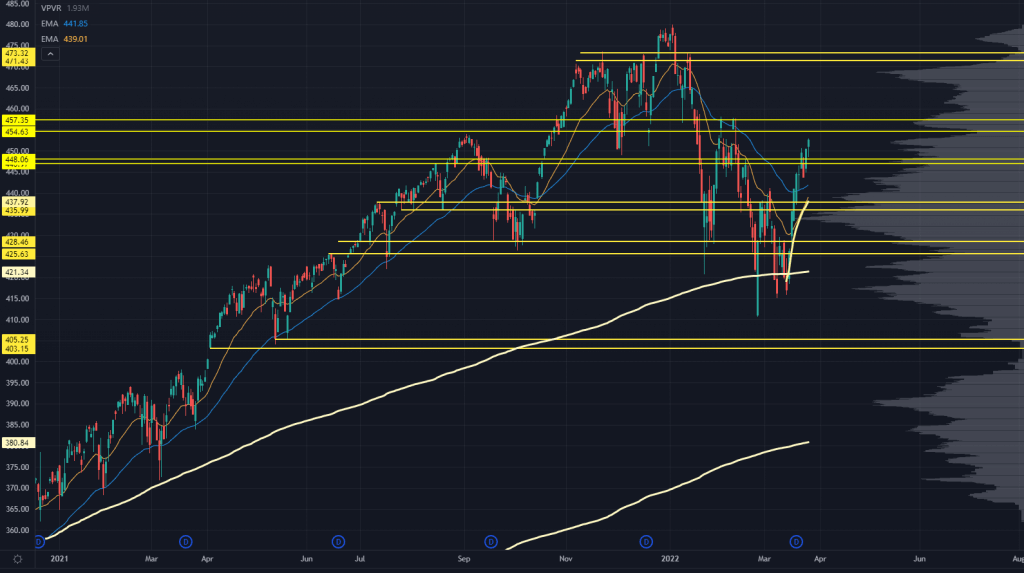 Last week, I wrote the following:

And boy, the market sure loves to rip higher with fewer participants on board.”

Turns out that’s what happened.

And TSLA knocked out a 30% rally in just a few short weeks.

We are, however, coming toward a massive level — the prior resistance from the highs in both Feb ’22 and Sep ’21.

It’s a very large Low Volume Node (LVN), so you may not find a ton of liquidity there. You could see a rejection.

Given the move’s speed, it’s reasonable for the market to take a breather.

My only conditional on that bearish thesis is that the lack of market liquidity can run this thing higher than most people expect.

Oh, and that doesn’t mean we need a crash to reset this fully.

We saw a similar rally in Sep-Oct 2021, and it took a full month before we found sellers again. Granted, we have a lot more overhead supply that’ll put a damper on things.

But keep in mind that shorting new highs every single day has blown out many traders recently.

For now, expect 454-457 to be a big level to contend with. Expect some selling to show up as we head into that.

To the downside, I’m focusing on the swing Anchored Volume Weighted Average Price (AVWAP) from the lows right before the market took off. If it can manage to hold that, market structure will be much better.

For now, it’s reasonable to say this is a type of bear market rally. We saw a 14% pullback, and commodity prices affect the Fed narrative which can lead to more risk adjustments.

With that backdrop of uncertainty, we probably won’t have a straight march higher. Expect a lot more range and higher reversion tendencies as we head into the summer. 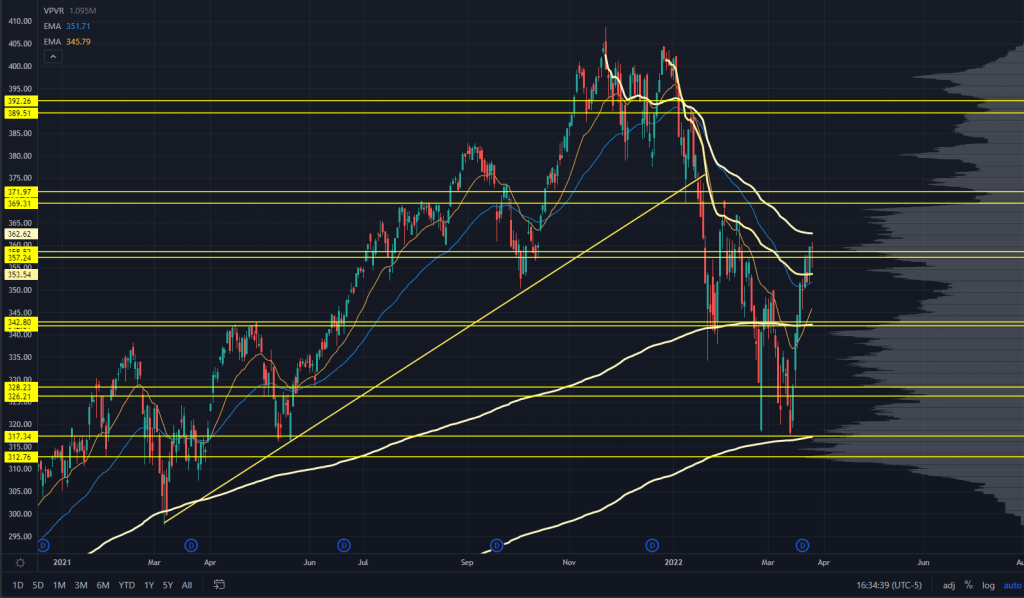 The weight of AAPL, TSLA, and the semiconductor sector has given the Nasdaq a serious bid.

It blew through the AVWAP from the December highs, and we have another one up on deck from the all-time highs at 362.62.

We’re coming into a zone where a ton of volume has traded, as shown on our Roadmap.

If some market participants are still holding from last summer or fall, they may want to adjust their size and get some back at breakeven.

Watch the large components of the QQQ to get a better read. AAPL is coming into some huge levels, yet MSFT hasn’t seen a lift.

We could have an instance where AAPL pulls back, capital flows into MSFT, and QQQ just chops around for a while. That’s the most likely “correction” scenario that would lead to higher prices.

A level to watch is the swing Anchored Volume Weighted Average Price (AVWAP) from the recent lows — not shown on this chart, but it sits right around our pivot level at 343. If we chop around, that AVWAP will start to “catch up” to price…

And we want to see the nature of the price action into that level to see if this whole thing doesn’t collapse on itself when the Fed changes its mind (again). 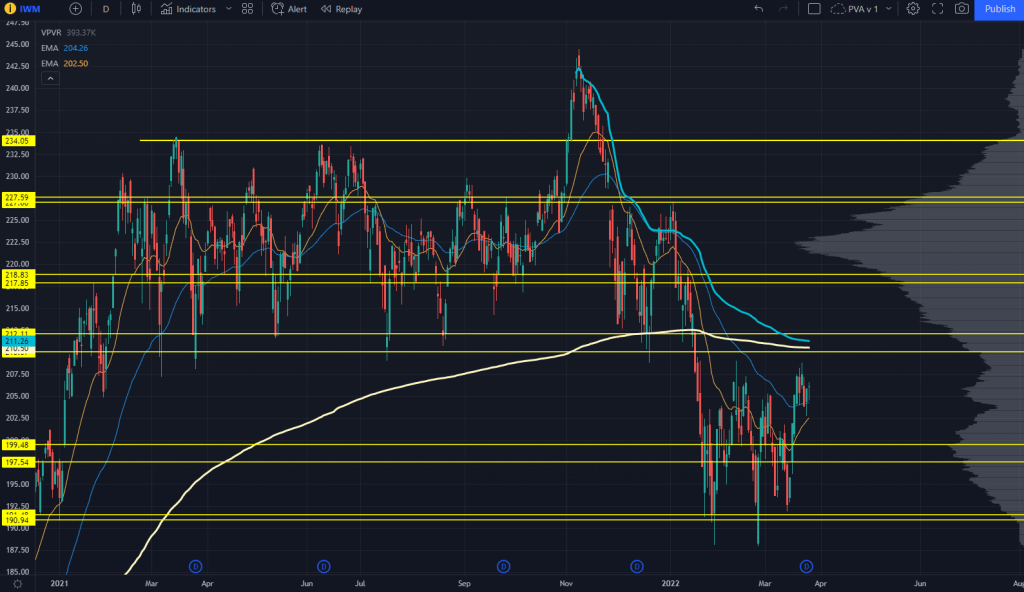 The Russell has about as clear of a level as we can get.

It’s that huge prior support level from the past year, the swing AVWAP from all-time highs, and another one from the swing lows from Sep 2020.

I cannot stress how important this level is in terms of the technicals. There are months worth of bagholders in the Russell that would love to get out at a good price, and they represent a massive level of overhead supply.

The textbook pattern would be a hard rejection. And then, we start another run to the downside to collect lower levels.

And the market really hasn’t been acting much like a textbook, has it?

Enough of the weak hands could have been shaken out. We’ll look for this as we head into the middle of the week. 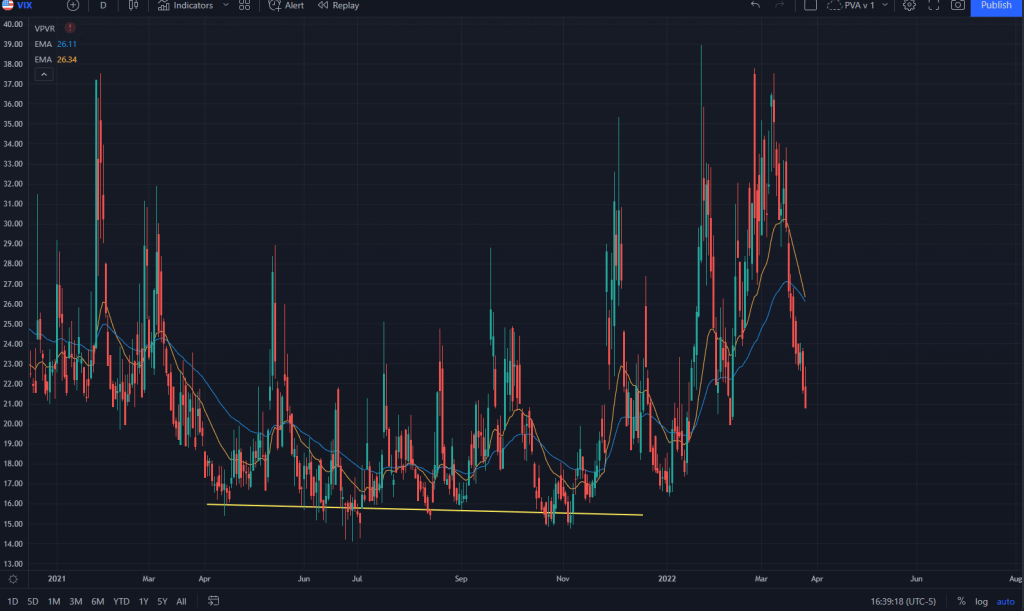 Last week, I boldly claimed the market can’t top out until VIX comes back into the 20s.

Yes, we’ve got wars going on…

But the “unknown unknowns” continue to dissipate for the time being.

The VIX doesn’t bottom like the market does. You’ll probably see a few days of sideways choppiness — perhaps in the 18-19 zone. Once all the hedges purchased in March roll off, we can start seeing some more downside air pockets.

Yet, for now, the VIX action provides a bullish bias to the markets.