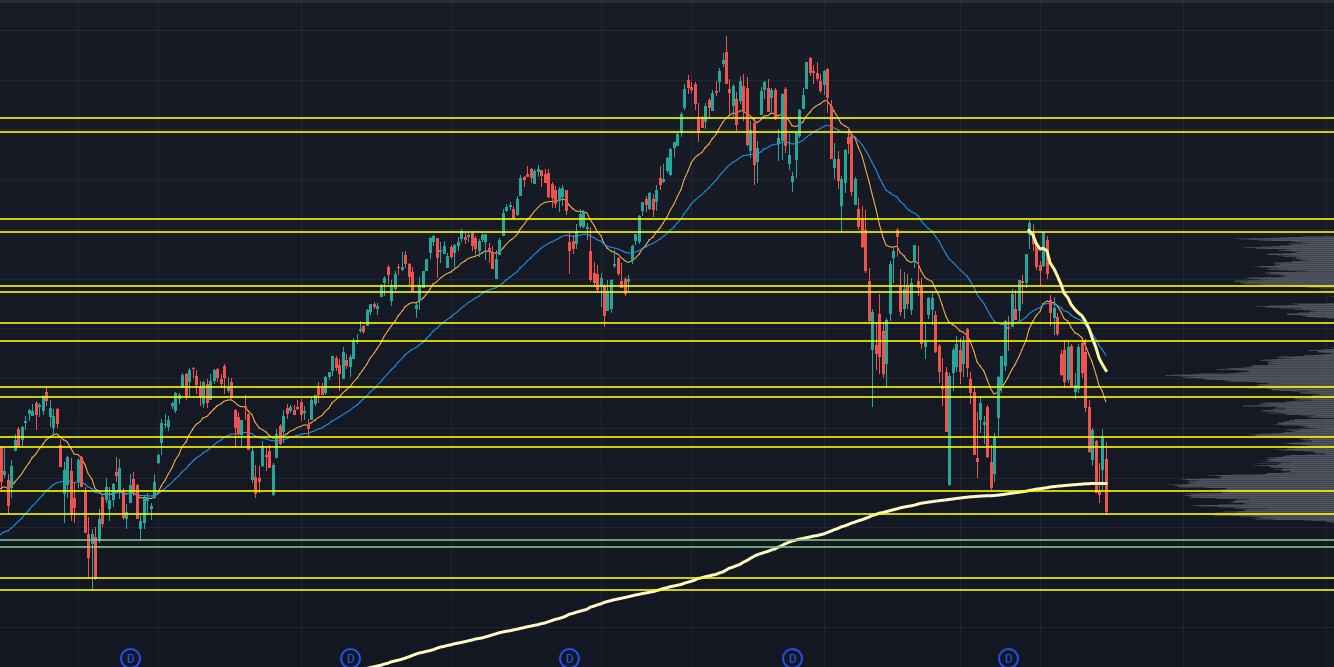 Boy, it got ugly out there.

April 22’s aggressive selloff created a ton of trapped inventory — they had to make the decision to either liquidate into the next gap up or puke into the close.

Some chose the first, but many chose the second… especially into Friday.

Some options-related dynamics were at play on Friday. Way too many investors piled into weekly options, causing a downside gamma squeeze. GOOGL and AMZN came out with earnings that compounded this issue, and we saw nasty price reactions to the downside.

Even with the volatility, our Roadmap levels are working exceptionally well. The support at 414-416 held for a few days, and Thursday’s gap up ran into our 425-428 zone used to liquidate inventory.

And just like last week, we were at a massive level at Friday’s close. You can make the case for some kind of a bounce here — especially when similar levels are showing up on the Nasdaq 100.

But that’s not a true “bottom” call. It’s just showcasing the potential path this market could run.

Sellers control this market. Until the S&P can properly recover and hold above 425-428, it’s tough to make any kind of aggressive directional bet.

I’m warming up to the idea that we could see an undercut of the recent range lows that leads to a massive move higher.

I’m keying off two areas: the first at 403-405 because that’s where we found responsive buyers around this time last year, and it’s a key volume shelf.

Under that, we have the gap fill. Then, we come into a massive volume shelf just under 400, with some “whole-number” anchoring that will be used to justify investment decisions.

Stupid, I know, but it’s proven itself time and time again.

Under that, we have the swing Anchored Volume Weighted Average Price (AVWAP) from the March 2020 lows. If we get it enough time, it will rise up to catch price as we head into those key levels.

The levels are the same to the upside.

We have the resistance from Thursday’s high, and above that, we have 435-438. Given the bear market rallies we’ve seen recently, you can’t discount that level as impossible.

Yet, the current price action tells me that it still is pretty low odds.

The Nasdaq took out recent lows, and looks a touch worse than the S&P.

This is because mega-cap tech stocks are finally getting taken out. TSLA sold off hard as Musk pulled $4B out of the market. GOOGL and AMZN had nasty moves to the downside, as mentioned.

Now, buyers from the past year are now underwater on their positioning. I think we’ve already seen a good amount of deleveraging in high-growth tech, so this move will be driven by whether names like AAPL and NVDA can catch a bid somewhere.

The huge level I’m watching on the downside is 300. That’s the level from the August 2020’s parabolic spike and the March 2021 lows. If we flush to that this week, I’m buying that aggressively.

We have a minor level (highlighted in green) that I’m not sure will be a “clean” level. But because there’s so much distance between here and 300, I had to find something.

It’s an internal pivot level and a minor low volume node (LVN), so I’m not giving it too much weight. Other than that, we could see a tricky “failed breakdown” if we really wanted to piss off the majority of market participants.

The upside levels are the same. 326 held as resistance on Thursday, so that level is valid. Then, we have 336 which lines up with a volume shelf, and the swing AVWAP from the March highs.

The Russell is tricky here simply because we do not have enough information on our Roadmap.

It ran so hard, so fast, after the 2020 election, that not enough trading was facilitated to properly map this out.

Way too many eyeballs are watching that line and “hoping” for a pull into it. We could easily truncate this selloff at some minor levels and retest prior support before we even get close to 170.

Two zones, 177 and 174, are the best chances of finding some support. You’re best off focusing on the underlying sectors like KRE and XBI to get more clues on this market.

This past year, we’ve seen 3-4 cycles where market participants freak out enough to crank the VIX above 30… then once enough hedging happens, we see a drop.

I could easily argue that the past two bear market rallies were driven solely by a drop in the VIX.

When that happens, equity premiums drop. This can lead dealers to buy the market to reduce their directional exposure. This “vanna squeeze” has led to some monster upside moves.

Now, we’re back above 30 as we head into a Fed meeting this week. We know they’re going to hike 50 basis points, but the language will be important.

Are they going to talk the later hikes down, or will they keep doing the full-court press against inflation?

Either way: Resolving that pulls risk out of the market, which could lead to a drop in the VIX. That can drive another “vanna squeeze” where equities head back and test some upside levels.

One argument against that is VVIX: 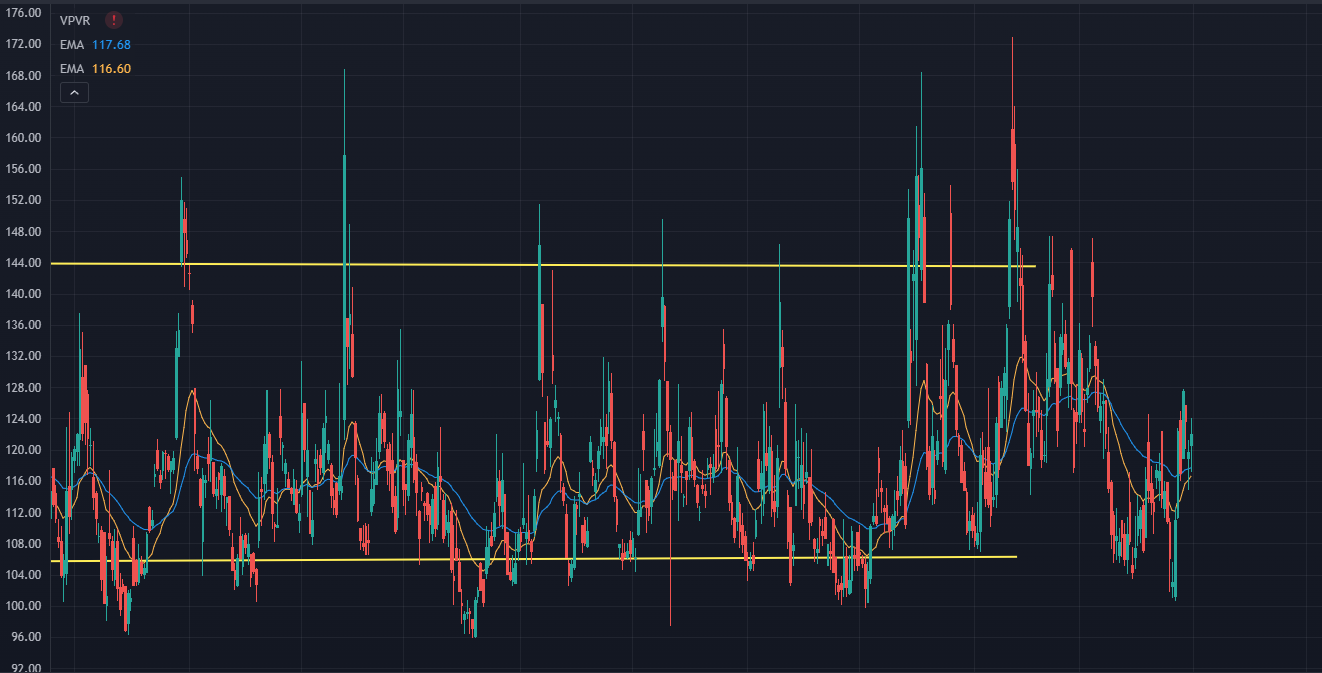 Right now, we haven’t seen a ton of response here. I don’t have a good answer, and it could run either way, depending on your bias.

If you’re bullish, you could say that the “smart money” doesn’t think we’re going to see an exogenous risk event in the next 30 days.

If you’re bearish, then you just call it “stupid money” and take the other side.

Maybe everyone’s tired of hedging with VIX products, only to get blown out as we see reversion, and that the “third time’s the charm.”

For another capitulatory bottom in the market, it would be nice if VVIX could run above 145, but it’s not required for a bounce.

That’s all for this week’s Market Primer. Good luck out there!

Oh, and one more thing:

If you’d like to equip yourself with the Roadmap I used to analyze these indices:

Check out this free training.