War in Ukraine Spotlights This Growing and Critical Industry

Dave Gilbert here, Editor of Smart Money.The first major battle of the Civil War is sometimes referred to as the “picnic battle” because folks packed their sandwiches and opera glasses and followed the Union army out of Washington to observe what they assumed would be an easy victory over the Confederates.

For us, it’s hard to comprehend the idea that civilians would set up chairs in a war zone, rather than run as far away from it as possible.

But today, a new kind of warfare is invading every aspect of civilian life, and there is nowhere to run. We have all become unwilling, and often unwitting, “soldiers” in a new kind of combat: cyberwarfare.

This new technological threat is also an investment opportunity. Let’s dig a little deeper into the story…

When smart investors talk about building wealth in technologies that are transforming our world, we naturally think about the cool stuff that affects our everyday lives — how we communicate, do our work, travel, entertain ourselves, live healthier.

We don’t think of warfare. Not until recently, anyway.

Guns and artillery are still primary weapons of war, but in modern times armaments now include guided missiles, satellites, drones and more — all made possible by or enhanced by technological progress.

The next phase in the evolution of war tactics appears to be using the technology that underpins so much of modern lives to do harm. President Biden on Tuesday warned of possible attacks against critical infrastructure and American corporations, and he urged business leaders to strengthen their cyber defenses.

Here’s something else possible only in the digital age: Citizens in other parts of the world are joining the battle — remotely. Shortly after Russia invaded Ukraine in February, a computer hacking group called Anonymous declared “cyber war” against Russia.

The group of “hacktivists” has already claimed responsibility for shutting down Russian websites, leaking data, hacking into broadcast television and video security feeds and more. 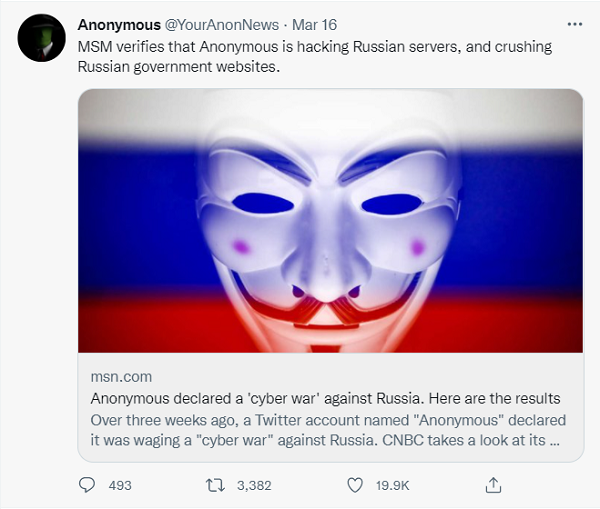 Russia’s Ministry of Digital Development said it was “recording unprecedented attacks on the websites of government authorities.”

We all know that cyberattacks are not new; some sources identify the first one as nearly 200 years ago! In the 1830s, a couple of guys hacked into the French Telegraph System and stole market information.

Today, we’ve become familiar with DDOS (denial of service) attacks that shut down popular websites and high-profile data breaches in which personal and financial information is stolen.

As you probably recall, hackers successfully shut down the Colonial Pipeline last year, the largest fuel pipeline in the States. Colonial eventually shelled out $5 million in “ransom” to get it operational again.

An Ounce of Prevention

Eric Fry has said that fail-safe security is becoming an absolute necessity for businesses of almost any size, especially because of the burgeoning work-from-home trend. He equated the transition to how banks upgraded their security through the years:

“Back in the ‘olden days,’ most neighborhood banks operated with wide-open doors and no security of any kind.

“Although bank robberies posed a legitimate threat, they occurred so infrequently that very few banks would bother with expensive security measures like hiring armed guards.

“But as robberies increased over time, so did the imperative to boost security in various ways. That’s why most neighborhood banks utilize basic security protocols like installing cameras and holding as little cash as necessary outside the vault.

“Let’s imagine that would-be robbers were trying to breach the bank’s defenses every single day — by bursting through the door with armed robots and drones, tunneling under the vault, hacking into money transfer systems, impersonating Brink’s security personnel, or everything at once.

“Suddenly, your local savings and loan is no longer that folksy place where you sit down with a pleasant teller to decide if your personal checks should carry images of puppy dogs or kitty cats.

“It is now a fortress.

“And the more that businesses and individuals migrate their technological lives to the cloud, the greater the imperative to secure the data and apps that reside there.

Those estimates pre-date the war in Ukraine, and it now looks as if the growth of cybersecurity could accelerate, as governments and businesses heighten their focus on cyber risks.

Some of the biggest cybersecurity companies in the market include firewall maker Palo Alto Networks (NASDAQ:PANW) with its $60 billion market valuation, as well as software firms Fortinet (NASDAQ:FTNT) at $52 billion and CrowdStrike (NASDAQ:CRWD) at $50 billion.

Eric’s most direct cybersecurity recommendation is smaller than those companies and is a content delivery network (CDN). He likens CDNs to “data minimarts” that operate closer to end users than the massive web-hosting warehouses known as “data centers.” The CDN he recommends carries about 30% of the entire world’s internet traffic, and says it is also becoming one of the world’s leading cloud-security firms.

Tired of the Volatility and Uncertainty? Here’s What You Should Do

Benjamin Franklin famously said, “An ounce of prevention is worth a pound of cure.” He was talking about preventing fires, urging his fellow Philadelphians to take care how they disposed of live coals, holding chimney sweeps accountable, and bringing together a group of men to fight fires whenever they broke out. The result was the first volunteer fire company.

The same can be true of cyberattacks, as businesses and governments around the world now look to prevent attacks rather than recover from them. It takes time and costs money, and just as with our hero firefighters, you hope you don’t need them, but you’re glad they are there when you do.