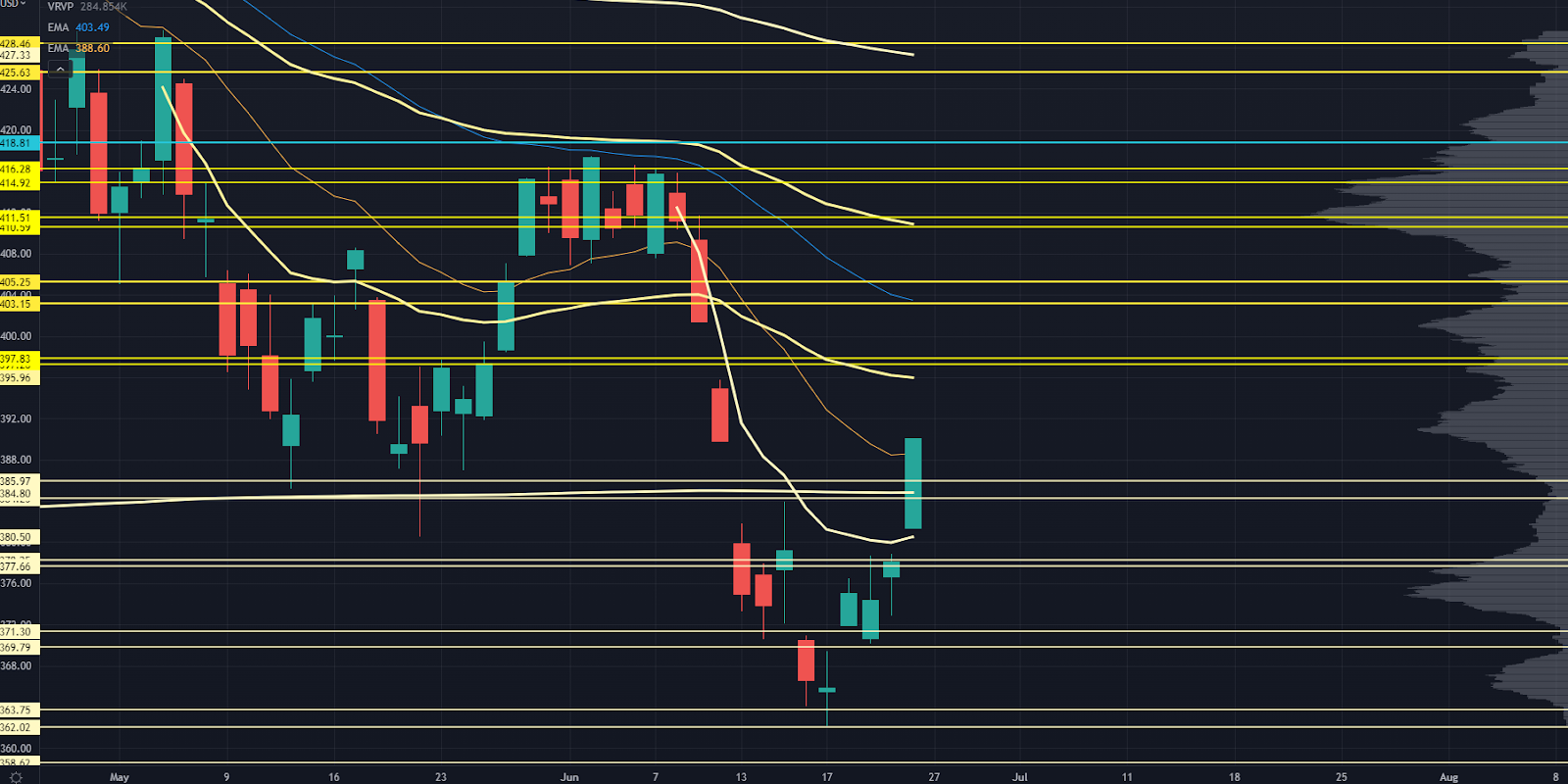 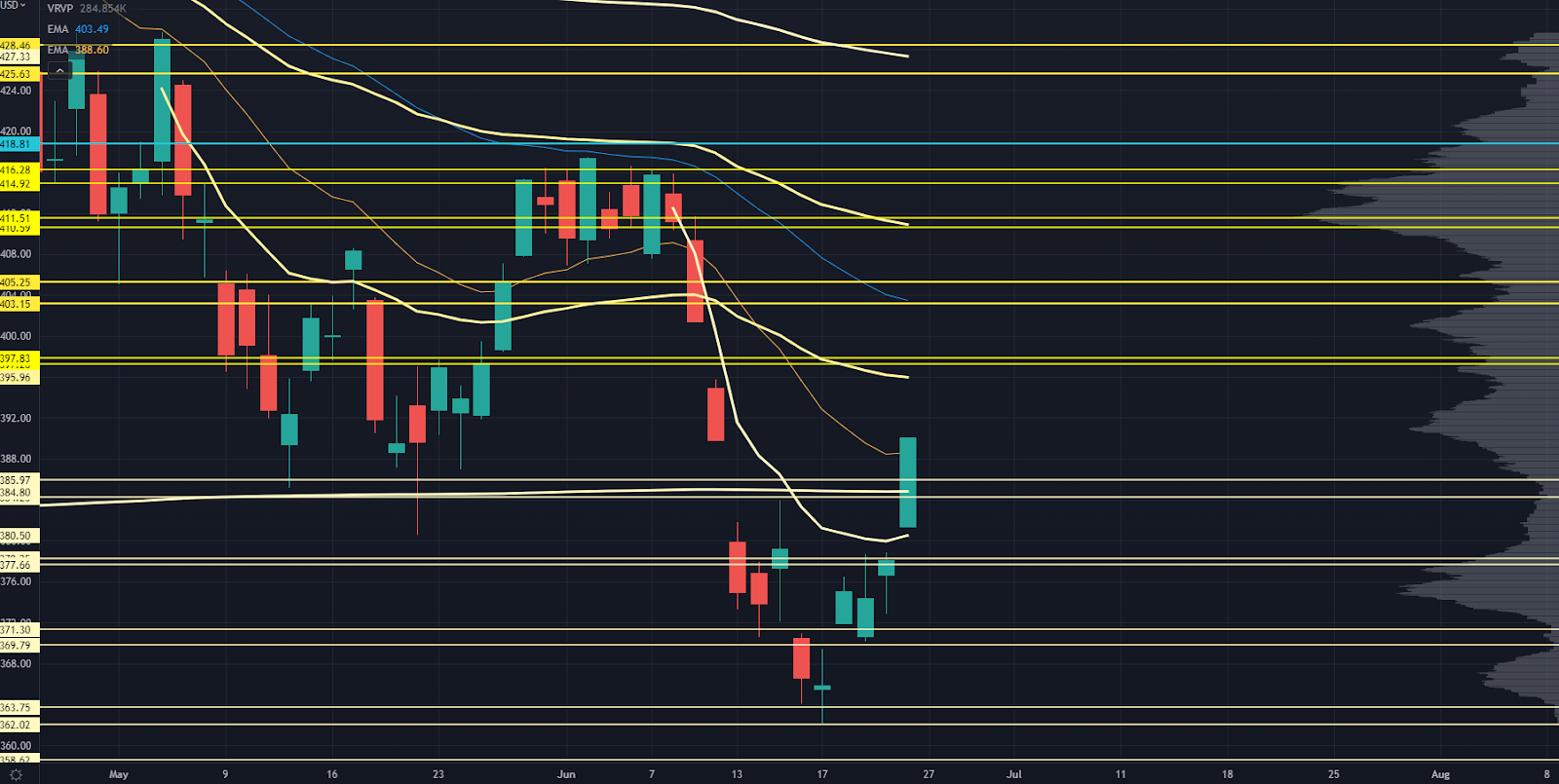 Causing a huge momentum shift in the market.

Gamma squeezes can lead to nice moves higher, but they tend to die off quickly and be a function of which options are about to roll off.

The past two week’s action could have been a capitulatory move in multiple assets.

The CPI print and the Fed’s subsequent 75 bps hike seem to have “bookended” this recent selloff. If enough inventory has cleared out into stop losses, they won’t be there to sell into higher prices…

Which can lead to a higher auction to capture new supply.

This is not marked on the chat, but is the closest high volume node (HVN) we have. This could be a place where we see some trapped inventory unloading at breakeven.

This is an internal pivot level from May’s trading range and the swing Anchored Volume Weighted Average Price (AVWAP) from the early May highs.

A bit underneath that will be the June 10 “CPI Crash’s” open, so that’s a reasonable place to expect sellers.

This is a key HVN and pivot resistance from the May range, and it will collect the 50 EMA.

I’m adding this one since it’s the low end of June’s trading range before the market fell apart (again).

If we get there quickly, it’ll line up with the swing AVWAP from the late march highs.

Prior support from the May range lows and the swing AVWAP from the March 2020 lows.

Below this level, the market structure changes quickly. We end up with fewer trapped shorts and more trapped longs.

Volume shelf and resistance from the Tuesday – Thursday trade. The swing AVWAP from the June 17 lows comes into play here.

Recent swing lows, although I wouldn’t expect a clean double bottom on this.

Instead, look for the divergence at the next lower level.

Key LVN and the August 2020 pivot highs. If we retest the recent lows, this would be the first area to look for a stop-loss run. 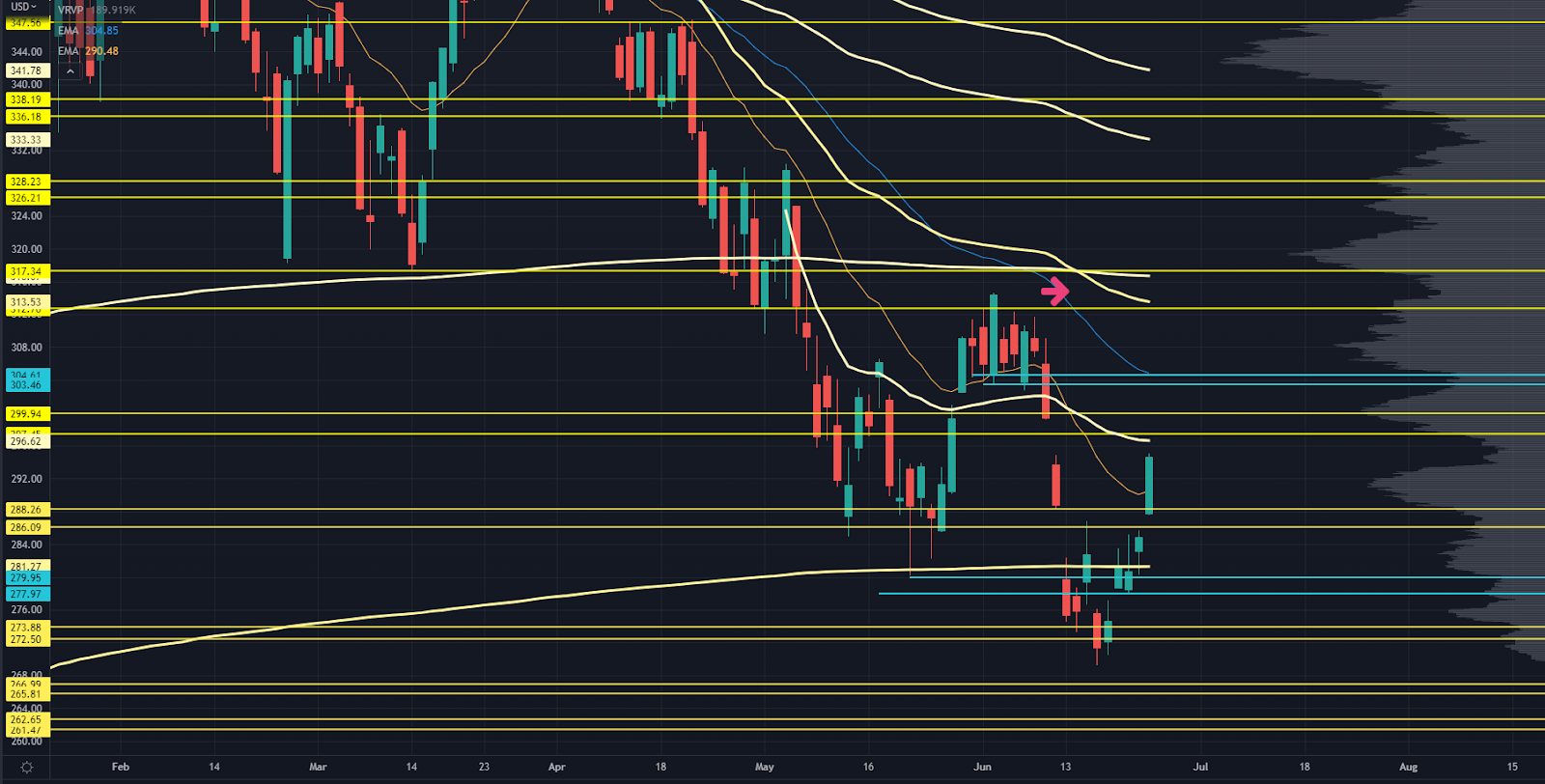 I’m adding a few extra reference points that are developing as the market structure changes.

Trading action may continue to reinforce these levels and may lead to much stronger pivots in the market.

Just like the S&P, there was a nasty gamma squeeze higher on Friday, and we are close to a reset of the crash that happened two weeks ago.

This is a swing AVWAP from the May highs, gap fill, and the start of a value area that could bring in some supply.

The June range lows combined with the 50 EMA and a local LVN.

Large zone here. You could split it up if you want, but I’ve highlighted it with a pink arrow because it’s a weird spot.

That level lines up as an LVN over the past year’s trading action, along with the swing AVWAP from the March highs.

Zooming out and capturing the past two years’ data shows a different structure: 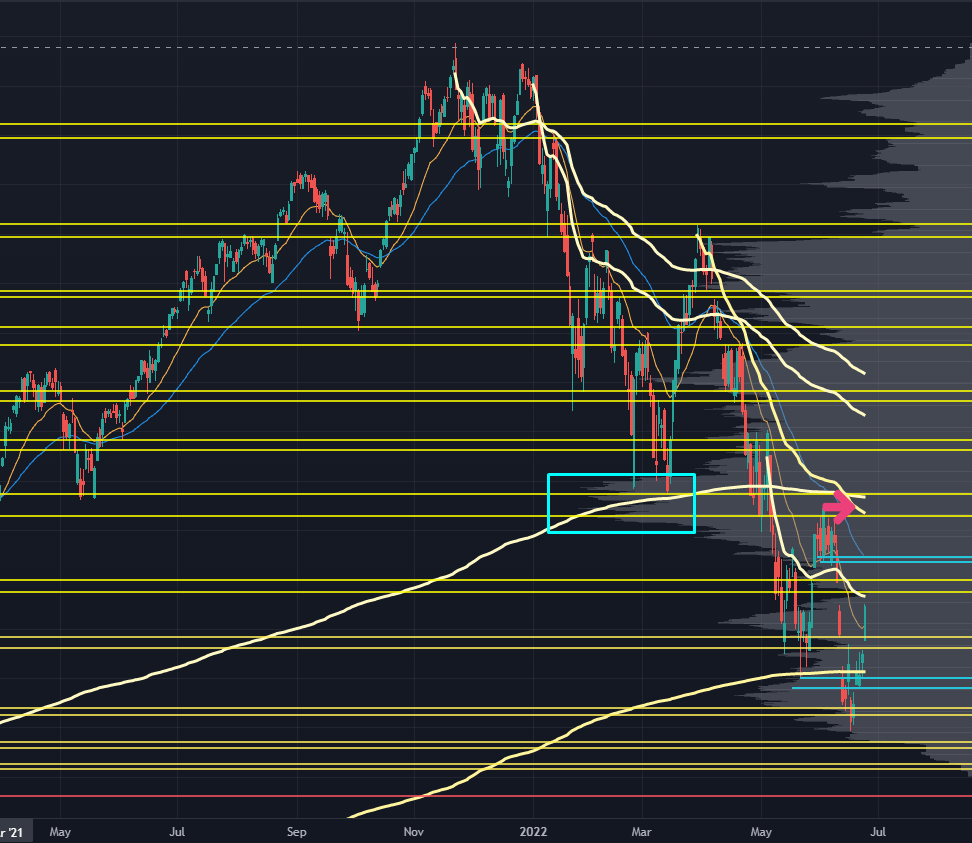 It’s the HVN for this entire range.

And as we know, HVNs can act as magnets.

This is a massive level on multiple timeframes and the prior support from the March swing lows. I expect this level will need to be tested to see what kind of trade we get into it.

This isn’t marked on the chart, but is a good reference point to see if Friday’s rally sticks.

It’s the closest HVN to the downside, and if that holds, you could potentially see a continuation long on a dip buy.

Key LVN, gap fill, and prior resistance from the recent highs. If we tag this level we’ll probably overshoot, thanks to buyers trapped from Friday’s trade.

Close to the rest of the lows, but a little higher because that’s where the market structure sits. 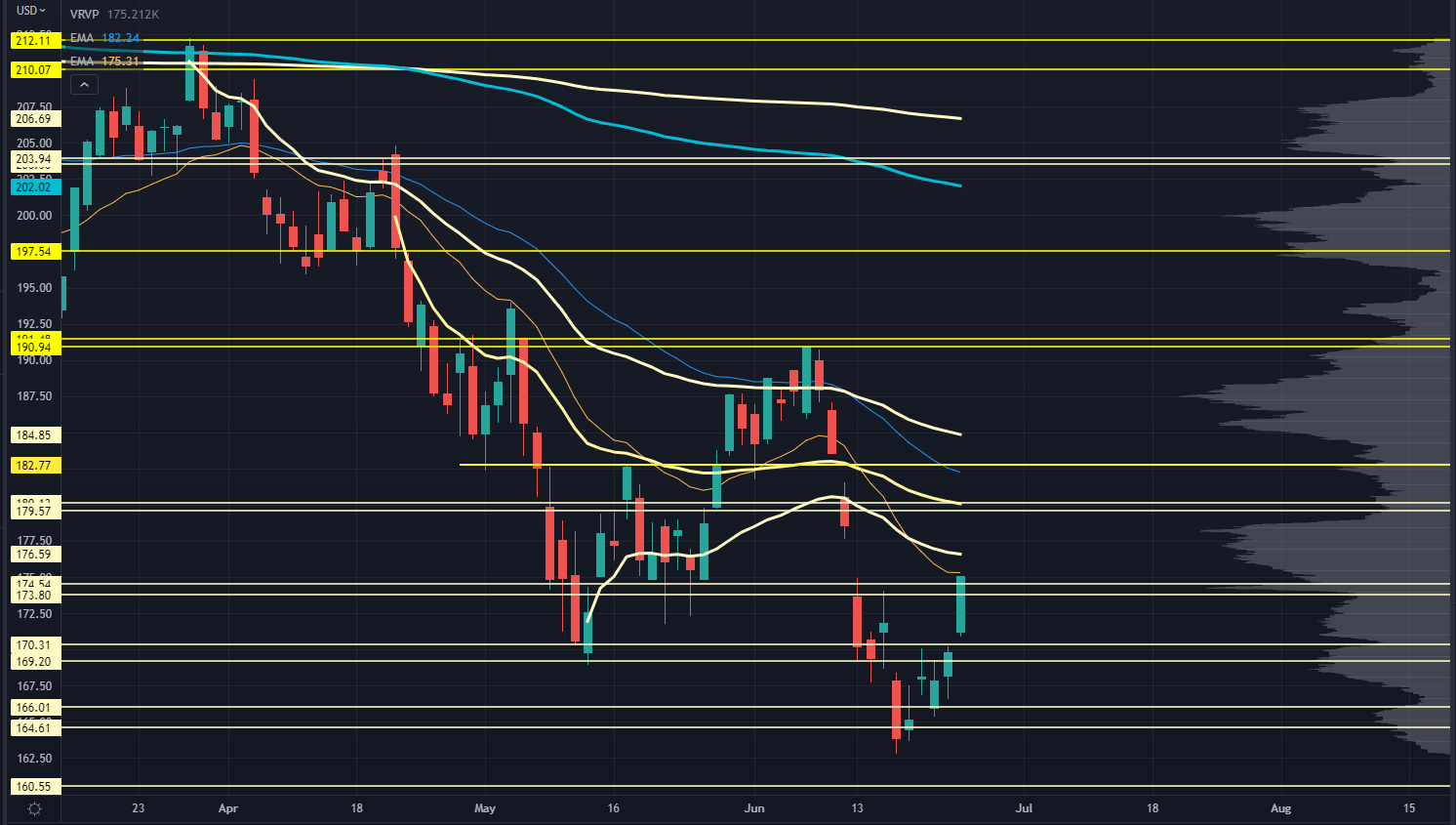 Hopefully, you’re sensing a pattern after seeing my analysis of the prior two indices:

The levels we’re watching are synchronized across multiple assets. When markets run with high volatility, this is to be expected, so don’t be surprised if it sounds like I’m repeating myself…

I pushed this zone a little lower because we’ll collect last Friday’s gap fill, a volume shelf, and the swing AVWAP from the April highs.

Second gap fill, and if we get enough time, it’ll line up with the swing AVWAP from the March highs. It’s also the lower end of the June trading range.

I’m viewing the upper end of this zone as a reference point to see how price trades if we retrace some of Friday’s move.

That’s an internal pivot level from the May swing lows and a local HVN on a longer-term chart.

This is a retest of recent lows.

Next LVN in play. This would be a good place to load up into a “stop run” scenario. 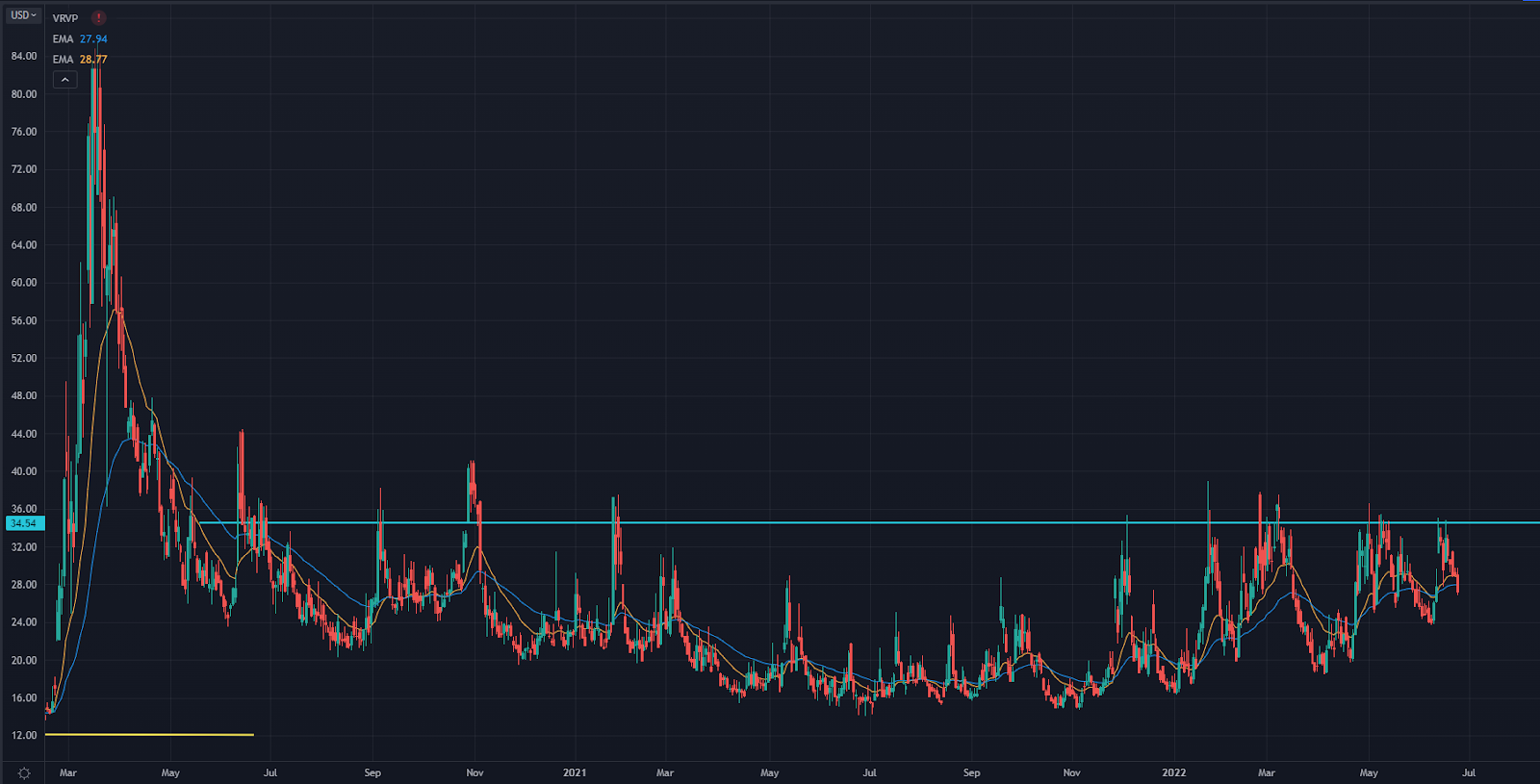 The volatility markets continue to surprise me.

We had a 13% move to the downside in a short time — a very fast crash — and the VIX didn’t budge.

Sure, it came into that 35 reference point…

But it’s still trading at a discount to short-term realized volatility.

If the VIX starts to tank, it’ll drive the markets higher because of the options-related flows, so consider what the market could do if VIX heads to 20 soon.

This will most likely be driven by any big deviations in macro data, or if a Fed member gets on TV and starts trying to talk rates higher to get in front of further adjustments they have to do.

That’s a wrap for this week’s Market Primer. Next:

Learn how to equip yourself with the Roadmap I used to analyze these indices!